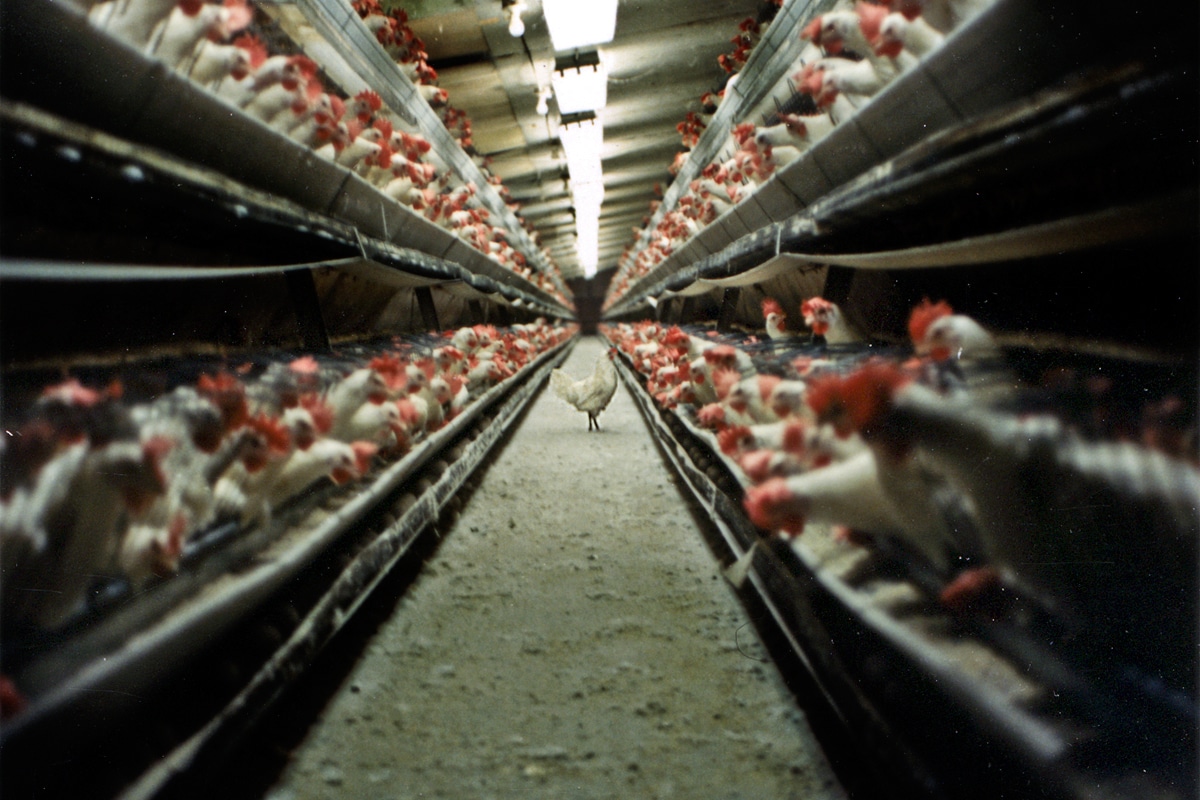 Around the world, egg farmers are working to improve animal health and welfare by designing new and better cage-free housing systems. For the most part they have been successful; cage-free birds seem to be healthier, happier and stronger. But there are downsides to cage-free production that most consumers don’t know and need to be improved.

Researchers from the Center for Proper Housing, Poultry and Rabbits (ZTHZ) in Switzerland are working on solving those problems. AgriExpo e-Magazine contributor Melanie Epp traveled to Switzerland to learn firsthand what kinds of challenges the researchers address.

Led by Dr. Michael Toscano, the team researches all kinds of welfare issues, working on projects on piling and smothering and depopulation methods. Both are very real issues in cage-free poultry facilities.

Smothering can occur when birds pile together in groups, explained Jakob Winter of ZTHZ. To better understand piling behavior, Winter surveyed local Swiss farmers on the frequency and duration of events in their flocks. Of the flocks surveyed that had a history of piling, Winter said smothering incidents occurred in eight of 13 flocks; seven experienced regular losses of 2–5 birds per week. While some incidents lasted just 30–90 seconds, others went on for two hours and 40 minutes. One farmer reported losing 60 hens in one incident.

One farmer reported losing 60 hens in one incident.

It is unknown why birds pile, he said, but he suspects light, temperature and attractive objects trigger the phenomenon. Winter is currently running a series of experiments to test his theory, and to find ways to humanely stop them from doing so.

While the Swiss researchers have been focusing on passively occurring piling incidents, a commercial farmer has focused on piling of a different nature. American poultry producer John Brunnquell said piling on his farms is often triggered by fear. Based in Warsaw, Indiana, Brunnquell is president and founder of Egg Innovations, a unique business of 65 identical 20,000-bird layer barns.

“Piling is generally triggered by a fear mechanism in the bird,” Brunnquell said in a recent interview for AgriExpo e-Magazine.

It could be a lightning strike a quarter-mile away or a large unknown sound. It could be the fans going or it could be someone opens the door and enters the building rapidly. But in some manner, a fear mechanism is triggered.”

While Winter researches piling in Switzerland, back in the U.S., Brunnquell has been making changes in the barn. “At the commercial level, what we’re working on is called habituation,” he said. “We’re trying to acclimate the birds to a variety of disruptive stimulus.”

For Brunnquell, this means changing clothing colors, walking at different speeds in different directions in the barn, and introducing unknown loud, sounds, like the radio. He said the training is working to a certain degree.

Brunnquell is in regular contact with Toscano and the Swiss research team. They share information and data in the hopes that they can learn from one another.

A necessary but sometimes unpleasant task, depopulation takes place when hens reach the end-of-lay period. Removing birds from cage and non-cage systems is very different, Swiss researcher Chris Gerpe explained on the visit to ZTHZ. In open aviaries, they are dispersed, making depopulation much more difficult. In addition to being an arduous process, preliminary results from Gerpe’s study reveal that approximately 8% of birds sustained injuries that were likely caused during the task, a statistic he’d like to see decline. 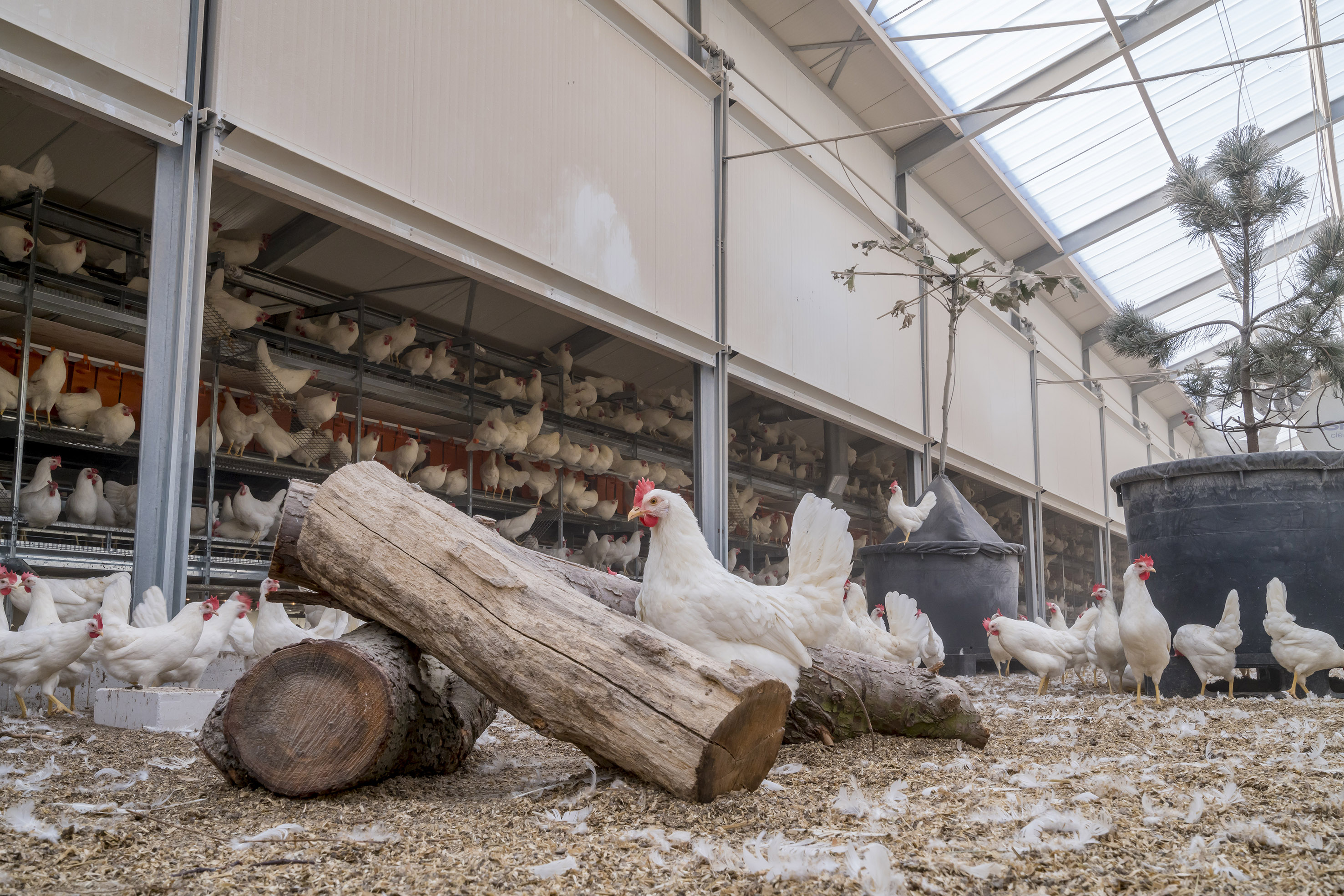 “We built portable blue light modules with a wavelength of 400 nanometers, a frequency at which hens do not see well, and equipped half of the barn with these modules,” Gerpe explained in a recent interview with AgriExpo e-Magazine. “The other half was either depopulated without lights or using head torches and/or lights from adjacent rooms.”

While Gerpe does not have conclusive results as to which lighting system works best at this point, he does recommend that farmers observe depopulation without participating in the task to ensure the process runs smoothly.

The Swiss researchers aren’t the only ones concerned about injury during depopulation. At Kipster, a farm much celebrated for its focus on animal welfare in the Netherlands, farmer Ruud Zanders works closely with Dutch animal welfare organization Eyes on Animals. Kipster uses ‘the Swedish Method,’ said Zanders in a recent interview with AgriExpo e-Magazine, which recommends catching the birds by two legs with one hand and supporting their bodies with the other. Since end-of-lay birds are fragile, even better would be to catch them upright around their legs and chest.

The Swedish Method is recommended as the best practice,” said Zanders. “It takes two to three times longer, but is more animal friendly.”

Back in the U.S., Brunnquell is conducting commercial-scale research to improve depopulation methods as well. Currently, he depopulates at night; the crew works with miner’s hats with white lights. Using 8–10 identical barns, Brunnquell researches depopulation under both white and blue light, explaining:

The literature seems to support that blue light is a more calming light than white. We’ll be measuring tonic immobility and keel bone damage.”

“Our long-term goal is to look at welfare from cradle to grave,” said Brunnquell.

ZTHZ is a collaborative research center between the University of Bern and the Federal Food Safety and Veterinary Office of Switzerland. Final results of both Winter’s and Gerpe’s research will be available in the near future. If interested, contact Michael Toscano at the Center for Proper Housing, Poultry and Rabbits (ZTHZ) at the University of Bern.