Fifty years ago the planet had just 3.55 billion mouths to feed. Today, that number has grown to 7.6 billion, 55% of which live in urban centers. As populations grow, arable land for food production becomes scarcer, and urban sprawl pushes food production further away from the city. In Europe, urban agricultural initiatives are working to increase production efficiency by using fewer resources and decrease the amount of space it takes to do so. Since their operations are located in the heart of cities, they address the issue of distance traveled from farm to fork. Three unique businesses share their stories.

Dryponics is based on three pillars: full automation, full climate control, and the use of a unique cultivation method that utilizes a proprietary substrate, Korzilius explained at an Agri-Food Innovation event at Brightlands Campus in Venlo, The Netherlands. Farm procedures—seeding, germination, propagation and harvest—are done automatically.

Growing units are completely enclosed to control climate. Plants are grown on a substrate that keeps roots dry. The system is energy efficient and uses very little space. The 1,200-square foot farm in Hamburg can supply enough salad for 8,000 people each day, and uses approximately 9 kilowatts of energy per kilogram of salad, said Korzilius. 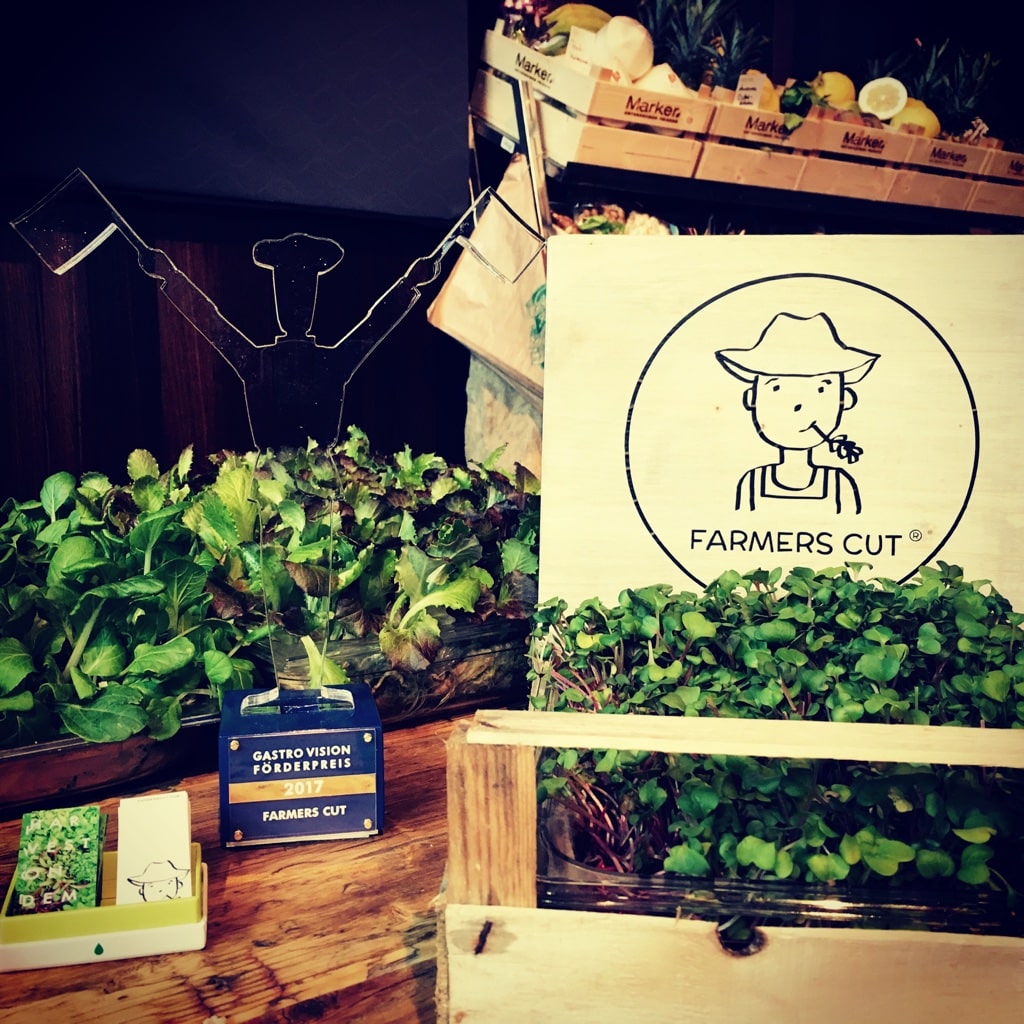 Dryponics is also more water efficient than other urban farming methods. It uses 68% less water that hydroponics, Korzilius said, and 37% less than aeroponics. More importantly, though, the system is modular, scalable, and can be easily retrofitted into existing buildings since structural integrity is not an issue when water weight is significantly reduced.

We developed a climate house where on any layer identical climate is the reality,” said Korzilius. “It’s the same temperature, same humidity, same airspeed, same CO2… And that’s something we haven’t seen so far from others, which we are kind of proud of.”

Farmers Cut knows that in order to be a viable business it must grow. “If we want to succeed, if we don’t want to be forgotten, we have to scale to hectares,” he said. “Indoor farming is only relevant if you build hectares.” 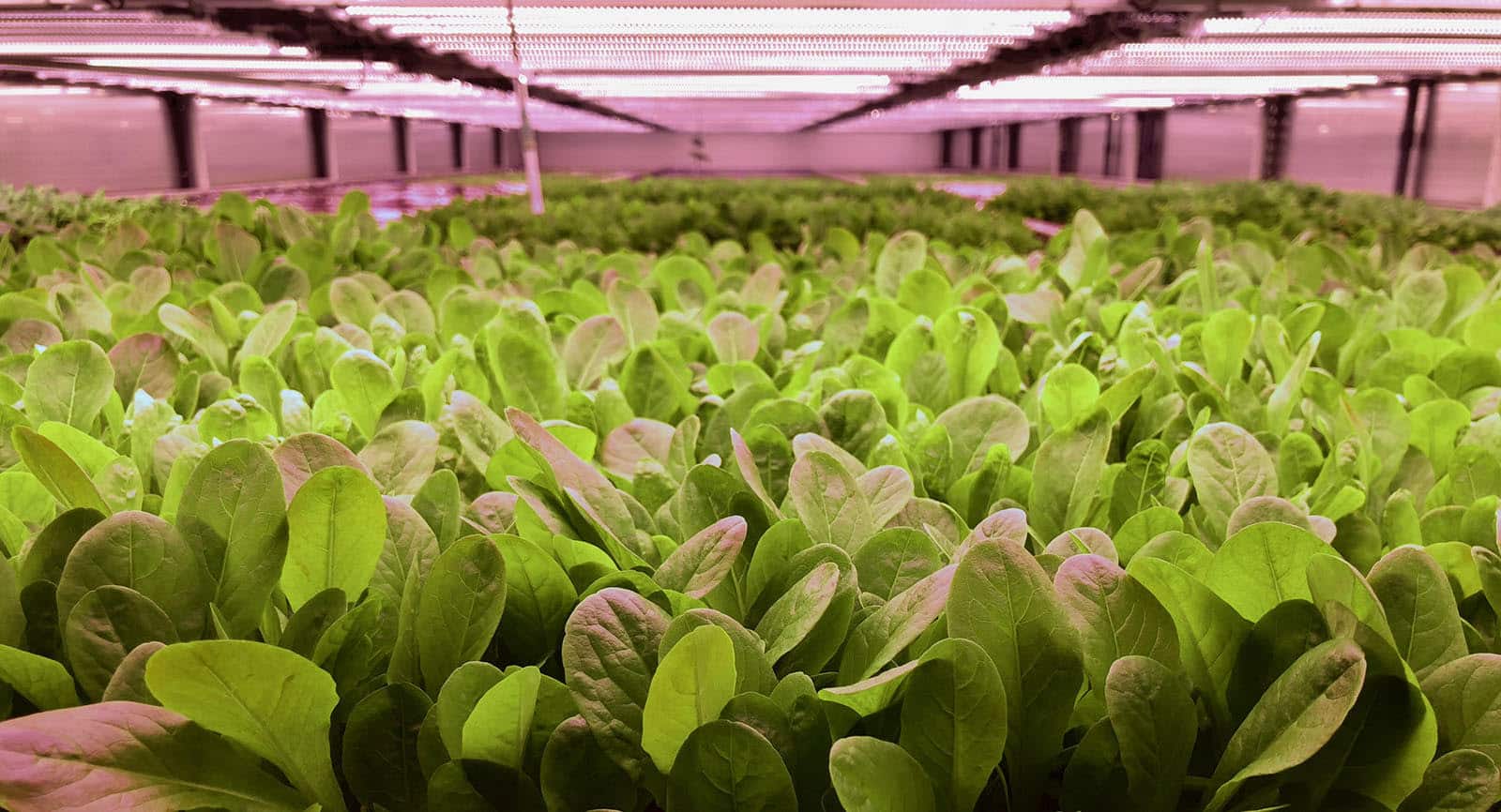 Farmers Cut is the first indoor vertical farm to operate out of Hamburg, Germany and the first company in the WORLD to coin and utilize Dryponic technology to grow leafy greens.
https://vertical-farming.net/blog/2017/12/17/farmers-cut-leader-dryponic-growing/

The Largest Rooftop Farm in Europe

Making use of unused space is one of the main goals of urban farmers like Wouter Bauman, an environmentalist at the Environmental Center of Rotterdam and beekeeper from Ambrosiusgilde. Since 2012, it has been his job to manage and coordinate a team of volunteers at DakAkker, the largest rooftop farm in Europe.

DakAkker is situated on the rooftop of the Schieblock building in the heart of Rotterdam in The Netherlands. Here, 20 meters above the bustling city streets, all manner of produce, including small berries, vegetables, edible flowers and herbs, is grown to supply local restaurants.

DakAkker uses Smartroof, a sensor and weather controlled roof that has the capacity to hold 60,000L of water. In times of excess rainfall, sensors alert the rooftop of potential flooding and drainage controls are implemented.

Rather than using soil, DakAkker employs a substrate made of a mix of lava stone, clay and plant material. Grow boxes are made of lightweight polystyrene.

DakAkker is 1,000 square meters in total, (200 square meters on the smaller roof, and 800 on the larger). It is home to birds, bees, wild plants and worms for composting. DakAkker’s rooftop farm is also home to a café where visitors can eat and drink in the greenscape above the city. Crops grown include smaller herbs (mint-lemon verbena and lavender), staples such as onions, leek and garlic, and bigger plants, such as zucchini, rhubarb and pumpkin.

The initiative also acts as an educational center for children. Sometimes, said Bauman, it’s the first time kids have seen carrots. They also learn about the function of bees and how the ecosystem works.

If you can show them, then you can put a seed in their thoughts and mind,” said Bauman in an interview with AgriExpo e-Magazine. “And hopefully when they grow the seed will grow and nature will be important for them.”

Perhaps most importantly, though, initiatives like DakAkker make use of empty spaces on rooftops. Doing so could mean fewer imports as food production could be just a rooftop away.

Not all urban farming initiatives are set in the heart of cities. Some, like Herenboeren in Boxtel, The Netherlands, are situated just outside the city, but still call themselves an urban agriculture initiative. What makes Herenboeren unique is that it is approximately 200 families own the farm cooperative. Together, they decide what the farmer should produce, and to some extent, how it should be produced. Co-founders Boudewijn Tooren and Douwe Korting explained in a recent interview with Agri-Expo e-Magazine.

“The movement is bigger than the farm.”

In order to participate in the initiative, each family must pay an initial investment fee of €2,000. After that, they are charged €10 per person each week for a selection of fruit, five vegetables and meat, based on what’s in season and available at the time. Most of the participating families come from within a 5-kilometer radius; the furthest families are within a 30-kilometer radius.

While the farm has the potential to serve 250 families, they’re not ready to do so quite yet. “The movement is bigger than the farm,” said Korting. 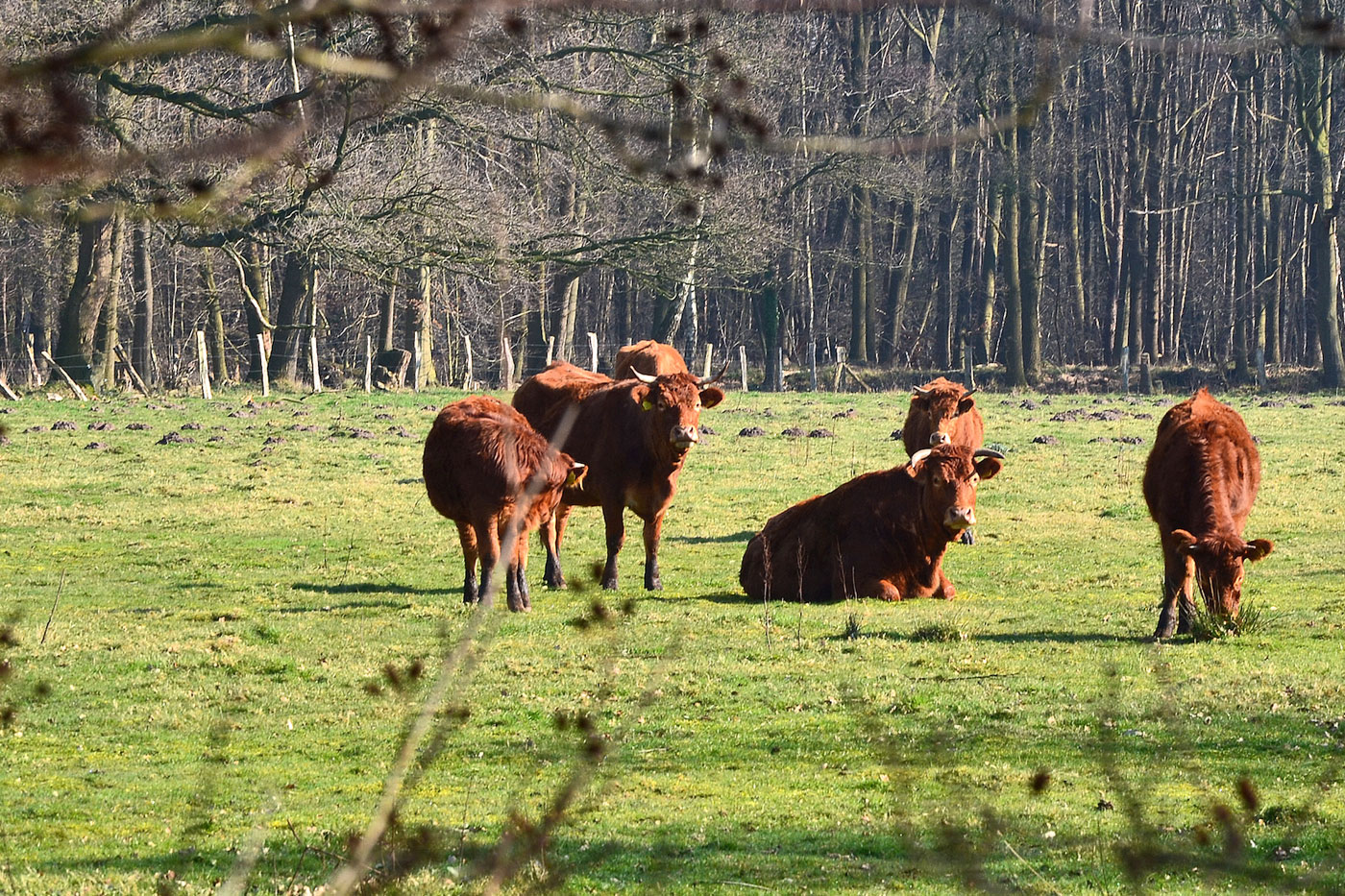 “The movement is bigger than the farm.” Courtesy of Herenboeren.

Herenboeren farm is 100 hectares in total, but only 20 hectares are actual farmland. The farm produces 55 vegetables and 20 types of fruit, all grown without the use of pesticides, chemicals or fertilizers. Each year, families receive 7.5 kg of pasture-raised beef, 10 kg of free-range pork and 4 kg of chicken. Korting said they also plan to produce eggs in the future. Boxes are picked up once a week, either on Saturdays or Wednesdays, or delivered direct.

“At the end of the season we ask what they liked the most and what they had too much of,” said Korting. “We ask the farmer to make a schedule and present it as the new system of the coming season.” 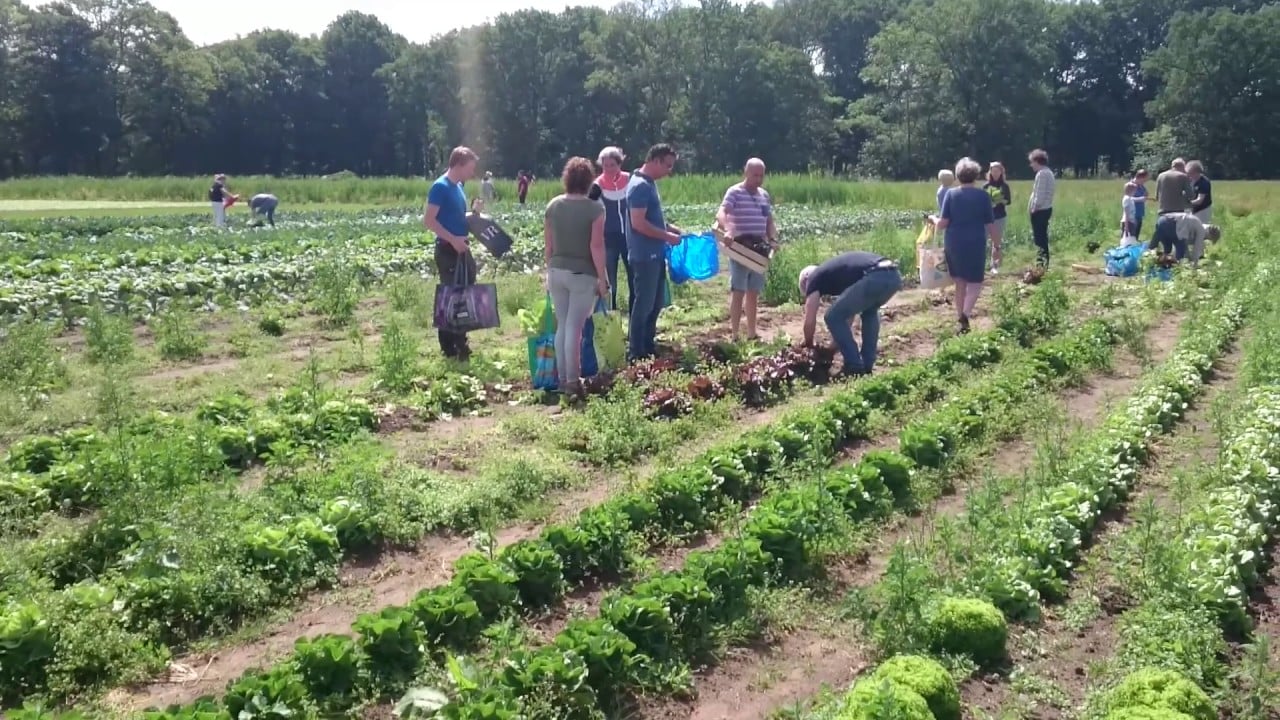 What is perhaps most unique about the initiative is that the farmer, Geert van der Bruggen, has been hired by Herenboeren to farm the land. This has its advantages since it eliminates the burdens felt by other farmers. Volatile prices, mounting debt, extreme weather and equipment costs are not his worry. All expenses and risks are taken care of by the farm initiative, while Van der Bruggen just has to farm.

Another interesting aspect of the Herenboeren model is its educational platform. Although participating families are not required to lend a hand, as some cooperatives require, they are allowed to. Korting says doing it this way actually motivates people to volunteer. Those who volunteer see firsthand the struggles farmers face. Doing so makes them more accepting of imperfect produce and helps bridge the divide between urban and rural communities. 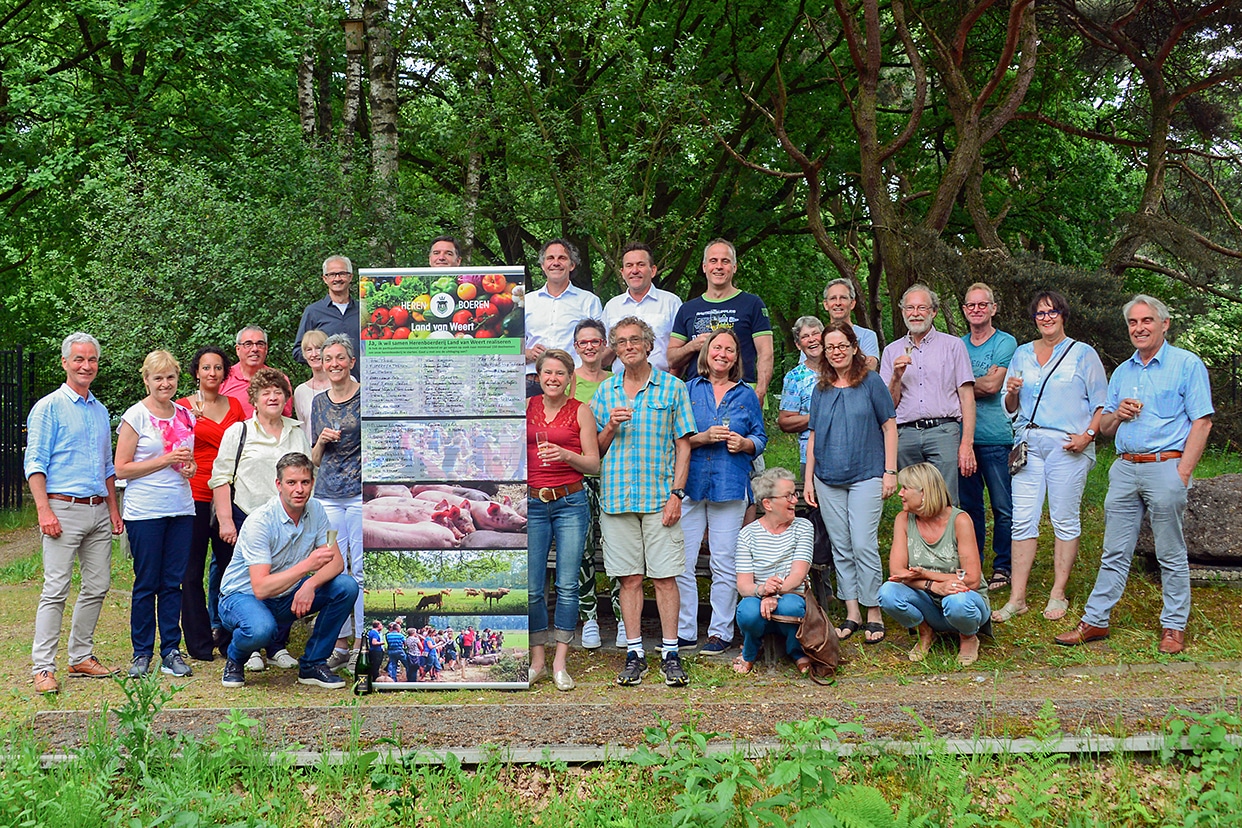