August 2018—The Philippines’ 32nd World Coconut Congress welcomed an international crowd this year for its flagship event The World’s First International Coconut Congress. Held in Manilla, international businesses showcased their products and participated in three days of conferences. Watch our video report to hear how downstream processing is the seed to our coconut byproducts, bringing additional revenue to farmers.

Continue reading the article to find out how coconut oil can be used as a non-drug therapy for Alzheimer’s disease and how innovators are using the leftover coconut husks and the whole tree to invent new products.

The coconut plantation featured in our video report belongs to one of the international visitors of the coconut congress in the Philippines. The Sambu Group plantation, PT Pulau Sambu (Guntung), is located in Indonesia and has a story of its own—read below.

August 2018—During the World’s First International Coconut Congress in the Philippines, we learned that the coconut palm is one of the most sustainable crops with a fruitful lifespan of 60 years. Some of the plantations in the Philippines have been around for over 800 years.

In the early 2000s, certain celebrities such as Madonna took home their love for coconut byproducts. After this, international consumers began to demand, which opened the market to a global level. Dean A. Lao Jr., managing director at Chemrez Technologies, explained in an interview with AgriExpo e-Magazine:

Consumers are heading away from sugary drinks, away from refined sugar. The coconut industry has responded to this by creating a coconut sugar alternative. Also, vegans eliminate dairy from their diet and can now incorporate coconut milk and flour into their meals.”

As the demand for natural products rises, coconut oil becomes a major opportunity in terms of growth and revenue for the health, wellness and green industries. And, to take the matter further, doctors and scientists have been working together to prove how coconut oil benefits our health. In addition, innovators and scientists are finding ways to use coconut husks and the palm’s leaves for a more sustainable industry.

You might like to read this article by The Chalkboard, a guide to living well, entitled Pressed Juicery now Makes the Coconut Milk of our Dreams—explaining the benefits of coconut oil and milk.

A Non-therapy Drug for Alzheimer’s Disease

Several conferences on coconut oil and its health benefits brought attention to how this oil could help prevent heart disease, diabetes, Alzheimer’s and other diseases. The reason for this is that coconut oil contains a high quantity of medium chain fatty acids (MCFA) which converts into ketones and the ability to stimulate the body to reproduce ketones on its own. Read about the health benefits of ketones here.

According to a study by Cambridge, MCFA are unique in that they are easily absorbed and metabolized by the liver, and can be converted to ketones. Ketone bodies are an important alternative energy source in the brain and may be beneficial to people developing or already with memory impairment, as in Alzheimer’s disease (AD).

During the conference “Coconut oil and its therapeutic properties,” Dr. Bruce Fife, President of the Coconut Research Center in Colorado, USA, explained:

Medium chain fatty acids are the only naturally ketogenic fats, meaning they can be turned into ketones regardless of your metabolic state, regardless of what foods are in your diet. When they’re consumed, they’re automatically converted into ketones.” 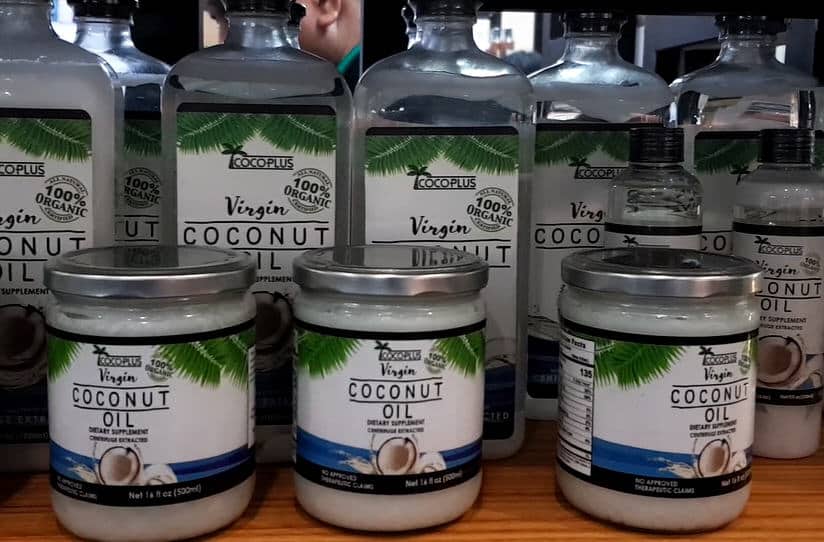 Although a few other foods contain medium chain fatty acids, coconut oil leads the race to fight against disease thanks to its ability to stimulate the body to reproduce ketones on its own, as mentioned above. This is pretty good news for farmers of coconut plantations.

Dr. Bruce Fife is a nutritionist, physician, and author of the book, Ketone Therapy. In this book, Dr. Fife discusses the ketogenic concept, which involves consuming a high fat, low carb and moderate protein diet, and its many benefits. Listen to a podcast by Dr. Fife on ketone therapy.

Coconut Congress speaker Mary T. Newport, MD, also touched on the topic of health benefits but focused on Alzheimer’s disease. She recently published a case study entitled What If There Was a Cure for Alzheimer’s and No One Knew? also mentioned on her website Coconut Ketones. Her husband, at an early age, suffered from the disease; she used coconut oil to reverse the effects of his condition—it worked. Despite his improvement, the disease took its natural course and he did later pass away. Her research shows that coconut oil intake needs to begin well in advance in order to avoid its initial growth and progression. There’s more to the story that you can learn directly from her book.

Byproducts from the Coconut Husk and Leaves

Additional innovative advancements deal with transforming the coconut husk. Currently, in the Philippines, only 2 billion husks are used to make byproducts, while 7 billion are thrown away or burned each year. Certain farmers transform coconut husks into charcoal, used to generate electricity in factories. However, certain innovators are taking the husk even further. The CocoBoard, for example, is a transformation of the husk into a wood-like material; the husk and leaves from the coconut palm are used to generate a natural adhesive called tannin. Dr. Justino R. Arboleda of Coco Technologies Corporation spoke about this in a conference during the Coconut Congress:

With the coconut husk, we can make a 100% natural material, compared to wood which requires a lot of added chemicals.”

The first market for CocoBoard is social housing, according to Ueli Jezler, department head, Center for Development and Cooperation at Bern University of Applied Sciences, Switzerland.

We can use the CocoBoards as partitions, the ceiling, furniture, insulation and more. We’ve already been testing in several social housing projects in the Philippines.”

The coconut plantation featured in our video report belongs to one of the international visitors of the coconut congress in the Philippines. The Sambu Group plantation, PT Pulau Sambu (Guntung), is located in Indonesia and has a story of its own.

Sambu Group harvests hybrid coconuts to produce byproducts such as coconut oil, cream and water. They have a variety of the PB1-to-1 coconut; however, only 10% of what is used in their products comes from the company’s plantation, the other 90% comes from independent coconut farmers in the region. The Sumatra region has 10,000 independent farmers.

The founder made a rule not to reject coconuts coming from other farmers even if the factory is overstocked—this is meant to maintain a proper ecosystem for the work of coconut farming. 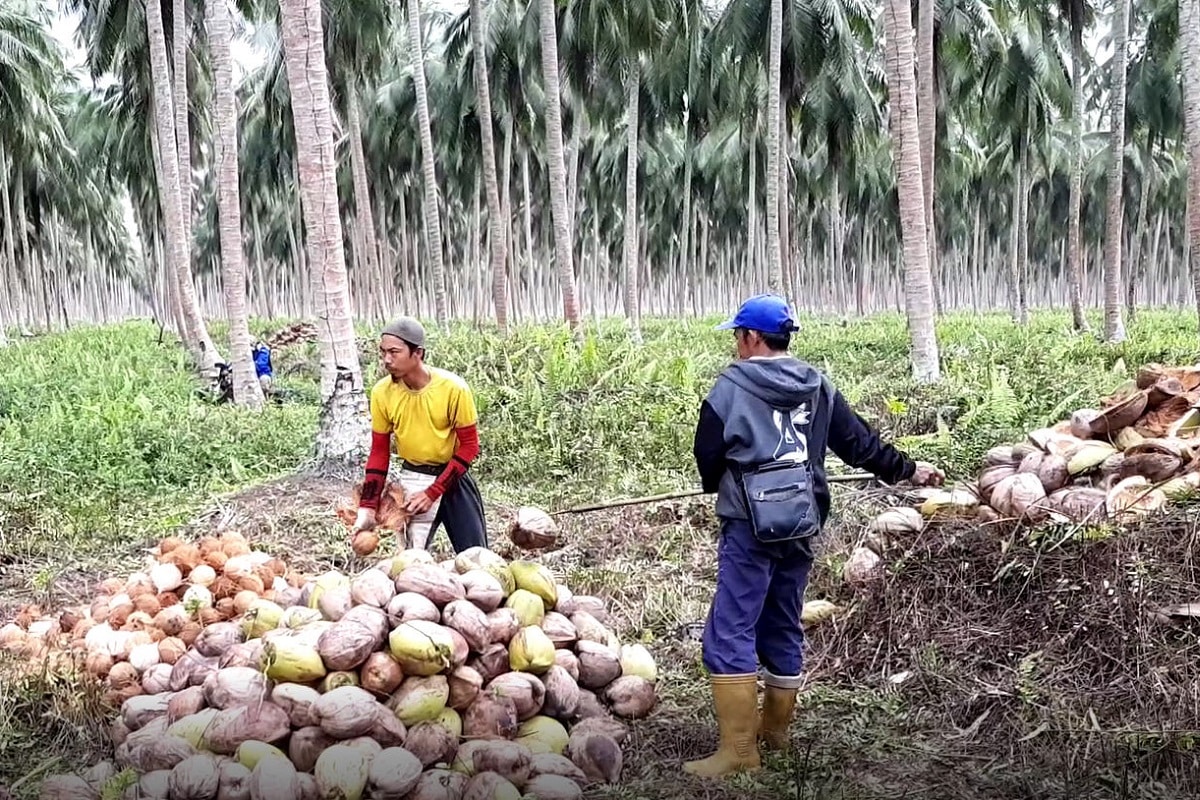 What sets the plantation apart is its water management system, an infrastructure which includes a set of canals for the circulation of oxygen and nutrients within the soil. The group built the canals, without disturbing the ecosystem, in order to balance the soil by keeping the to topsoil moist and airable.

Sambu Group currently uses the coconut shells to make charcoal which is then used for the plant’s electricity. The company plans to plug in biomass to generate electricity but still currently uses coal. The objective is to combine the two in order to transition into a more eco-friendly and sustainable way of working while searching for a more viable source.